It’s easy to feed people ideas. This is mostly how education is structured. ‘This is the information you need to learn, and you will be evaluated based on your comprehension of this knowledge.’ There are some important aspects of that, which we hope to bring to the studio: major art movements, fascinating artists, art making techniques. Our mentor core, collectively, has truckloads of information and our young artists are hungry for it.

The greater challenge for us has always been facilitating the generation of new ideas/content/artwork. At least once a day, someone says, ‘I don’t know what to work on’. It’s easy enough for me to recommend a project. I know the students well enough to toss something their way which they will probably find engaging. This semester I’ve suggested a few gems: do the seven deadly sins… as zombies etc…

Asking the student what they care about is much more difficult. Generating a dialogue, in which they can begin to articulate their values, interests, anxieties, convictions, and dreams often results in ideas for artwork that they feel personally connected with. We wrestle with these topics everyday. I always ask, ‘what do you do when you go to work as an artist, and the muse is back home on the couch, watching you tubes?’ The answer to that question is what we are hunting for when we develop a studio practice. Consistency, deadlines, discipline and good work habits.

Our next level dream is that the students would play an active role in creating the environment of the studio, or programs, the gallery and community engagement. We have programs such as the Critical Arts Program, that task students with curating the end of semester exhibition. We’ve also had several false starts in trying to organize a student committee. We’ve tried to help them organize themselves, given them lists of suggestions on how they might engage the studio and the community. For one reason or another, every student committee has ultimately failed to launch. Sure, we’ve had several student led activities. We’ve had movie nights, and done artwork for other organizations, but the trend has been one activity per round of committee, before they dissolve and return to regular studio engagement, or graduate and leave our paint splattered walls.

I was surprised this fall, when the students came to me and said they were forming a student committee. This is the first group to try to organize themselves without my prompting them to do so. A poster and a sign-up sheet appeared in the studio, and they’ve organized a weekly meeting time and are in the midst of writing a manifesto of sorts. They’ve informed me they will be submitting a proposal next week, for events and activities they would like to organize this semester.

Wow. I must say I am impressed. My fingers are crossed. Could this be the first few wobbly steps toward a studio led by the creative vision and tenacity of the the young artist whom we serve? Stay in touch this Fall and I will let you know how it goes! -Thom 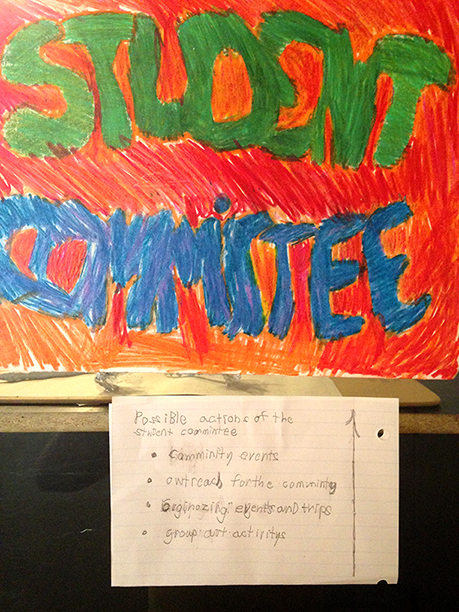