Shaun Murphy is a Saturday regular at the studio. He usually keeps to himself and hangs out in the back computer room with a few other students.  When I decided to interview Shaun, the only information I knew about him was his name and that he was pretty quiet in the studio.

While talking with Shaun, I learned that he has been in the Kent Bellows Mentoring Program almost a year and a half. Which means he’s gotten the chance to participate in three semester programs: digital arts, video arts, and now in critical arts. As a home schooled student, Shaun shared with me that he really enjoys coming to the studio and having the company of other student artists around him. Even though he isn’t always highly interactive with the rest of the students, he explained that he appreciates the environment that the studio offers him. When I asked how Shaun would describe the KBS program he said it was, “ …unlike what I had done before. It was a new experience, and it wasn’t like a regular school or anything. I really enjoy it.”

Since Shaun had been in two programs focused on computer arts already, I was curious to learn more about his interest in that area. When I asked what his favorite project was, he quickly answered that his Stop Motion animation project from video arts was something he was very proud of making. He informed me that he had mainly taught himself using an App with a little guidance from his mentor. After he showed me it, I was amazed. He did an awesome job for a first stop motion project! (I would definitely recommend watching it: http://vimeo.com/104047693)

The more Shaun and I continued to talk, the more I learned about the things he was interested in that I never would have imagined. It turns out his favorite style of music is classical and cinematic tracks. He even told me that in most movies he would prefer to listen to the soundtrack instead of actually watching it. His favorite movie soundtrack is from the 1980’s Batman movie.

The piece Shaun is currently working in the studio is a doodle drawing that he describes as a collection of random things. (I’m also beginning to think his favorite word is random because the title of his video project also included the word “random.”) However, after the mid-semester critique at the studio it became apparent that the “random” things Shaun described in his piece are more of a self-reflection of who Shaun is and how he thinks. The doodles he draws represent where his mind goes and what he thinks about. So not as “random” as he claims they are.

Over the course of the last few Saturdays, and getting a chance to know more about Shaun, I really think the Kent Bellows program is helping develop who he is as a person. Being in the studio with other students gives him a chance to get out of his shell and talk to other young artists. The most exciting part to me though is getting to watch the process of him and all the other students grow. 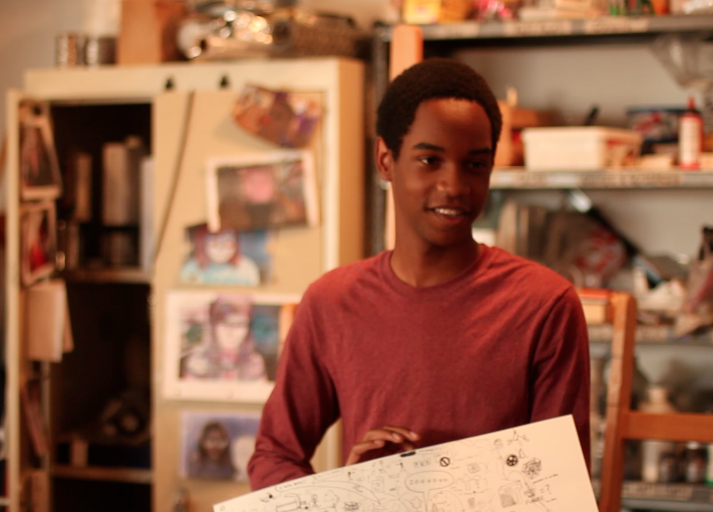