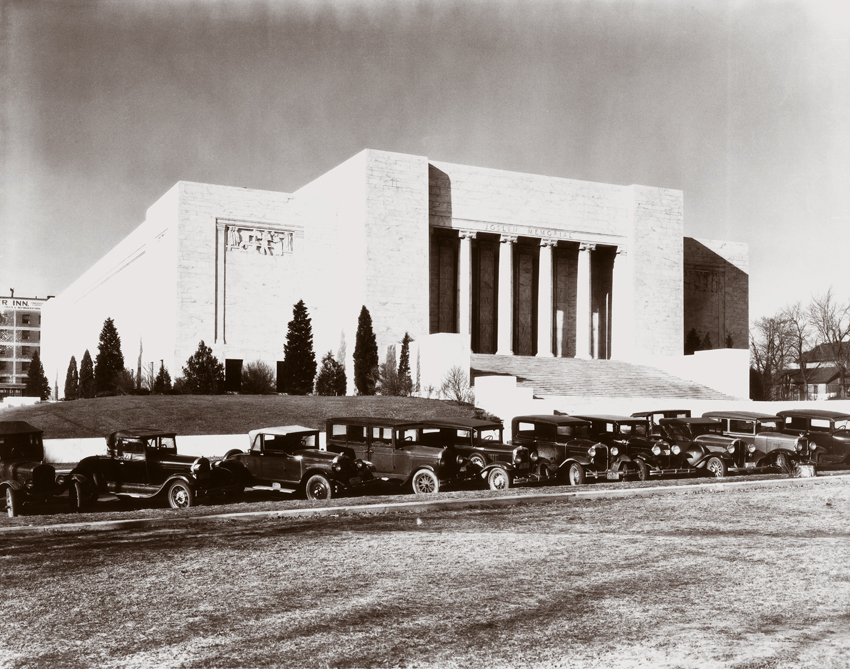 Ever wondered how Joslyn got its world-class collection? Like most museum collections, Joslyn Art Museum’s holdings have grown almost entirely through generous contributions from private collectors and donors. Many of the works in Joslyn’s collection had been in Omaha long before the Joslyn Memorial opened in 1931. These works of art and their owners are inexorably linked not only to the history of the Joslyn, but to the history of the Omaha Arts community as a whole.

In 1888, Omaha businessman George Washington Lininger erected one of the first art galleries in Omaha. Attached to the rear of his home at 224 North 18th Street, site of the Omaha Civic Auditorium:

“The gallery was 30 x 55 feet in size and is lofty with skylights above. The floor was a soothing quiet color in keeping with the dignity of the surroundings. During the day natural light will be used, and at night either electric light or gas as experiments may determine. The cost of the building fully will be $15,000….The private collection of Mr. Lininger, amounting to over 200 pieces, will be thrown open to the public…Mr. Lininger has eleven case of antique statuary from Naples that have lately arrived to be placed in the new gallery and in the niches of the outside walls. Among these are some old Roman judges, emperors, and other ancient celebrities, one pair of which cost 10,000 francs and as much more for duty.” (Omaha Watchman, November 9, 1888)

The exterior of the gallery was in the Italian Renaissance style, using brick and terracotta. It was open to the public free of charge on Thursdays and Sundays. Lininger’s gallery became a cultural staple in the city, where lectures and tours were regularly performed. During the year 1895, between 16,000 and 17,000 people visited the gallery, with an average Sunday attendance of 250 people. 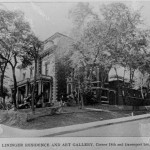 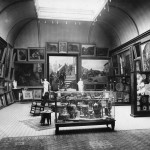 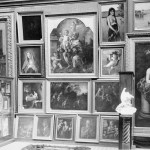 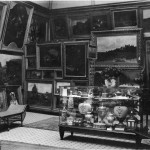 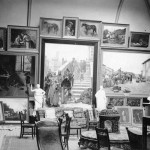 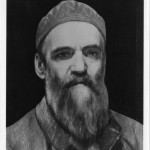 Lininger was an industrialist who moved to an embryonic Omaha, with a population of about 25,000, in 1873. He made his millions stocking and supplying in large quantities across the Midwest almost every conceivable type of farm machinery via several different business ventures over the next thirty years. He grew to love the burgeoning city, which had gained a negative reputation for being backwards, dirty, with poor roads. A poem by John C. Saxe published in Harper’s Magazine in 1869 describes the general feeling of those who passed through the city:

Hast thou ever been in Omaha,
Where rolls the dark Missouri down,
And four strong horses scarce can draw
An empty wagon through the town?

Where sand is blown from every mound
To fill your eyes and ears and throat-
Where all the steamers are aground
And all the shanties are afloat?

Where whiskey shops the livelong night
Are vending out their poison juice:
Where men are often very tight,
And women deemed a trifle loose?

Where taverns have an anxious quest
For every corner, shelf, and crack;
With have the people going west
And all the others coming back?

Where theaters are all the run,
And bloody scalpers come to trade;
Where everything is overdone
And everybody underpaid?

If not, take heed to what I say!
You’ll find it just as I have found it;
And if it lies upon your way
For God’s sake, reader, go around it.

It was the important to some in the city at the time to combat this negative image. Lininger’s involvement in the arts was fueled partially by a sincere appreciation but also as an attempt to promote the city as enlightened and cosmopolitan. 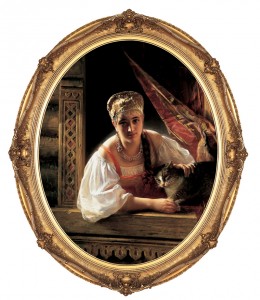 In 1879, 1885, and 1892, Lininger visited Europe with his family, bringing back more and more art for his gallery with each trip. In total, he visited 33 countries including England, Russia, Austria, Germany, Italy and Greece, China, Japan, and Egypt. From Russia, he brought back Russian Beauty and Cat by Konstantine Makovski. In Egypt, Lininger paid to be present at the opening of an Egyptian tomb, and then subsequently purchased the contents of the tomb, including pottery, mummies, and sarcophagai.

Prior to the opening of the art gallery, these items were stored in his home and displayed during local exhibitions organized by Lininger at different sites throughout the city, most notably at the Omaha Public Library. After 1894, a room on the third floor of the new public library became a permanent exhibition space for curios and works of art collected on Lininger’s expeditions. After the opening of the gallery in 1888, Lininger exhibited his antiquities at the library and mainly paintings and sculpture at his gallery. Joslyn has the original catalog of the collection of objects that were displayed at the library, including such items as a mummy of a woman’s hand, two mummies of hawks, four Egyptian bronze statues, approximately 150 Pompeian bronzes, candles used at Noah’s tomb, two suits of armor, three Persian daggers, and clays from various rivers throughout the world.

From 1886-1892, Lininger was responsible for or instrumental in a variety of art activities of Omaha. He founded the Western Art Association, which sponsored exhibitions, as was the Omaha Art Exhibitors Association, another group Lininger founded. He was responsible for organizing the successful Inter-State Exposition of Art of 1886, the first large-scale exposition of art, held in the new exposition building at 15th and Capitol Streets. Makovsky’s Russian Beauty with Cat was one of the paintings shown during this exhibition.

He also organized the first exhibition of the 1890 Omaha Art Exhibition Association, the purpose of which was ‘to collect works of art of the first rank and present them to view for the benefit of the people of the state.”  Dore, David, Vibert, Veronese, Rousseau, Rembrandt, and Bierstadt were some of the artist exhibited. It was at this exhibition that William Adolphe Bouguereau’s The Return of 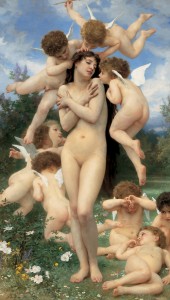 Spring was one of the central canvases, for sale for $18,000. One day during the exhibition in December of 1890, a man named Carey Judson Warbington threw a chair through the work ‘to protect the virtue of the women’; he believed it ‘was worthwhile to sacrifice one man’s life to rid the world of so corrupting a sight as that picture’. Warbington was arrested and a lengthy court case ensued, ending with a judgment of insanity for Warbington, the dissolution of the Art Exhibition Association, and the painting returned to Bouguereau in Paris for repairs. Lininger later bought the work when in London in 1901 for $10,000 and it became one of the gems of his collection. In January of 1976, almost a century after it had come under attack from Warbington, a former window washer with a history of mental illness picked up a bronze statue while in the Joslyn galleries and threw it at the picture, breaking the protective glass and punching a hole in the canvas, however not over any of the ‘most important parts’.

In September of 1891, the Omaha Academy of Fine Arts was opened under the auspices of the Western Art Association of which George W. Lininger was the guiding spirit. Lininger brought from Chicago to Omaha artist J. Laurie Wallace, a student of Thomas Eakins. The original classroom was located on the third floor of a building on 15th and Dodge Streets. The school survived the rough economic year of 1893, but to conserve funds rented the room on the third floor of the newly finished Omaha Public Library, which would eventually be used for exhibitions by Lininger. By 1894, the school and the Western Art Association were defunct.

Lininger, undeterred by the failure of the school and the Western Art Association, expanded his gallery in 1898 to ready for the Trans-Mississippi Exposition, during which he had more than 20,000 visitors to his gallery, and he was influential in the exhibition of paintings in the Fine Arts building. After 1900, however, the activities at the gallery gradually ceased, as Lininger grew older. After the death of Mr. Lininger in 1907, the gallery was static for many years until after the death of his widow in 1927, when his collection was dispersed at public sale. While some of the collection was dispersed outside of Omaha, local collectors purchased many of the works. Buying under the advisement of J. Laurie Wallace, The Return of Spring was purchased by insurance man, Charles W.  Martin. Wallace had remained in Omaha after the collapse of the Art Institute and established a very prolific portrait studio. Martin was a great admirer of art and had hired Wallace to help advise him on his collection. Wallace helped Martin to acquire Jean Leon Gerome’s The Muezzin (The Call to Prayer) and The Grief of Pasha.

Of Lininger’s collection up for grabs at auction, Martin also purchased Makovsky’s Russian Beauty with Cat. This work was gifted to Charles’ nephew, also named Charles, who eventually gave the work to the Museum in 1954. The bulk of the collection, however, was passed down to his other nephew, Francis T.B. Martin. Francis, who was also a Board member of Joslyn from 1954-1979, passionately love the paintings his uncle had assembled and gave many of the works to the Joslyn during his life. It was at the request of his uncle that upon Francis’ death, he give the collection to the Joslyn, which occurred in 1990. J.L Brandeis of J.L. Brandeis and Sons also purchased works originally in Lininger’s collection at the auction in 1927 as well and gifted some of these works, including The Philosopher’s Sanctum by Carl Moll and David with the Head of Goliath, after Guido Reni, in 1952.

Following Lininger’s death, interest in the arts waned in the city. Exhibitions were still being held at the public library under the auspices of the Omaha Society of Fine Arts, established in 1906. In 1925, the group changed their name to the Omaha Art Institute and made several purchases before it was dissolved upon the opening of the Joslyn Memorial. The works in its collection, including Grand Wood’s Stone City, Iowa, were given to the Society of Liberal Arts, the governing board of the Joslyn Memorial. Another important arts organization formed in 1915 when 100 Omahans organized the Friends of Art, each paying the dues in the amount of $25 a year. With the money raised, the group purchased and donated paintings that eventually would be fundamental to our collection, included Jules Breton’s Vintage at Chateau La Grange and William Merritt Chases’ Sunlight and Shadow.

Lininger’s collection and the arts organizations he helped to form were influential in cultivating an appreciation for art within the community and the ensuing collecting culture of Omaha at the turn of the nineteenth century. I think Lininger would be amazed but happy to see that some of his most prized works have wound their way down through the art lovers of the city into Joslyn’s galleries. Happily, the interest in art and collecting among the citizens of Omaha that Lininger helped to spark over 100 years ago has blossomed into Omaha’s vibrant  and ever-growing Arts culture today. As Omaha’s appreciation of the Arts continues to grow, so will our world-class collection thanks to those that would see their beloved works of art preserved at Joslyn Art Museum in perpetuity.