All views & opinions expressed in this article are that of the author.

The Rubell Family is remarkable for many reasons. Steve Rubell was the co-founder of Studio 54 in New York, labeled the hottest disco on the planet. His brother Don, an obstetrician, is married to an educator named Mera. They have two kids—Jason and Jennifer. Don and Mera began to purchase art shortly after they married in 1964. They scrimped and saved each week to pay for the art they purchased. To keep the cost down they focused on undiscovered talent. The Rubells spent time getting to know and understand the artists and their work, eventually acquiring the early works of these artists. Building and maintaining these relationships helped Don and Mera stay abreast of new artists exploding on to the art scene. An example of this is the Rubells’ relationship with Keith Haring. Don and Mera met him while he was curating and organizing exhibits at The Mudd Club. After getting to know the couple, Haring invited the Rubells to his first solo show. Upon viewing Haring’s work, the Rubells purchased every piece except one, which was acquired by another person. The flourishing friendship led Haring to introduce the Rubells to other up–and-coming artists like Jean-Michel Basquiat. The couple supported Haring and his work until his death in 1990.

A lot has changed in the years since Don and Mera started collecting art in the 60s. Contemporary art has a major presence all over the world, and the Rubells are major players with their own museum. Don and Mera, along with their adult children, Jennifer and Jason, have built a huge contemporary art foundation that has over 6,800 pieces of art by 831 artists—all housed in a renovated Drug Enforcement Agency warehouse in Miami.

30 Americans was assembled from this collection and showcases works by some of the most significant Black artists over the last 40 years.

I had waited for months to experience this exhibit at Joslyn Art Museum because after seeing the 30 Americans book the exhibit promised to deeply challenge my perspective.

Upon arriving at the exhibit entrance, I gave the lady my ticket, read the disclaimer, and the first image I saw was: 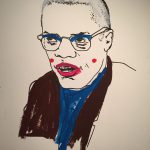 My first thought was why does Malcolm have pink lips? But, being a graphic artist myself, I knew there was more to it than that. I don’t like to immediately read what the artist’s intentions were. I want to think about it and see what the art leads me to believe. I came up with different scenarios of emasculation. I was frustrated and then decided to read what the artist wrote: Glenn Ligon gave a group of diverse school children coloring book images of different Black heroes and told them to color it. Most of the children did not know who these legends were. The idea was for them to make the Hero they needed today. With my initial pre-conceived thoughts about what I was going to see evaporating, my mind was finally “free” to move about the space.

I was really happy to see the diversity in people viewing this exhibit because I could listen to what everyone thought as they spoke to friends. However, as I walked through the exhibit I noticed that there was this extreme juxtaposition I felt with the White people there.

An example would be the piece: 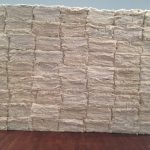 This piece was a wall built out of bales of cotton weighing 500 lbs each. A Caucasian young man walking a head of me, speaking out loud, said, “Is this the cotton they make cotton balls from?” I immediately felt this chill go up my spine because I realized that he, in the innocence of his question, was still thinking of the profit that could be made from the bales of cotton, and I was still thinking only about my parents picking it!

I want to say up front these are not bad feelings or thoughts. These are the challenges the 30 artists went through making these pieces. I was being transported into the mental core of this exhibit, and it was powerful! I was being confronted by a history most people would rather ignore. I saw people who didn’t look like me walk right by Kara Walker’s Camptown Ladies not realizing there was a White man riding a Black woman like a horse, while dangling a carrot in front of her face. I was realizing in real time what people see, and what they don’t, what they process and how they process it is relative to their experience. There were paintings that I immediately made intimate connections with, and laughed out loud because I ‘got it.’ The people next to me were staring at the painting desperately looking for whatever it was I found funny. Even if I wanted to, I could not explain lifestyle and culture. I knew if you have not lived it, you would never see the hilarious irony that is staring you right in the face.

I was struck by the irony of the charcoal drawing: 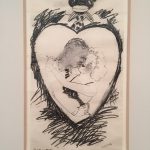 My Maternal Great Grandmother was considered in her day to be a Quadroon. This is an archaic term that follows the one drop rule meaning ¼ Black blood. She could pass; she chose not to. I thought about all the things that would make a person want to “pass,” and for whatever reason none of it appealed to her. Had even one thing changed her mind, I would not be writing this story!

The talk of the town is: 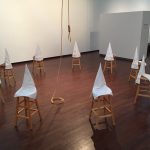 When you first walk into the room one patron said “The scene reminds you of ‘dunce caps’ and as you get closer you see the hanging rope and the eye holes of the Klan hoods at the same time.” This is a very challenging piece of our history, but art is deliberate, unapologetic, and about the experience. You have to be open-minded enough to receive everything the artist is saying here. It takes Bravery to produce a piece that talks about the abuse, suffering, and murder of African Americans for sport and as a game at the hands of White people in this country. It takes even more honesty to view it, because if you aren’t careful you will start to understand how ugly history is and be horrified.

I think the hardest part of this piece for people is the racial juxtaposition. As I was walking around this Duck, Duck, Noose with the White viewers, it was very real for me that just as some of my ancestors wore the noose some of their ancestors had worn the hoods! To be in the same space viewing an extreme piece with such a defiant message was more than powerful for me. I asked people how they felt about it and no one could really articulate it. They could tell me how important they think it is, but not how they feel.

Art, like music, has many genres and this Historical Subversive genre will not appeal to everyone. I personally think everyone should see the entire exhibit at least once, because it is always sobering to see what Black people have survived. I look at this particular piece I wonder where the people are who wore and still wear these hoods to conceal themselves?

Because of the juxtaposition in race that happens in America every day, it was powerful to view this exhibit along with people who didn’t look like me. The irony that you experience makes the entire exhibit feel interactive.

30 Americans is thought provoking, funny, unsettling, terrifying, historical, beautiful, ironic, and painfully personal. There were pieces I could not, yet approach; I will try again.

“That which does not kill us, makes us stronger.”
Friedrich Nietzsche

I am definitely stronger for having experienced 30 Americans!