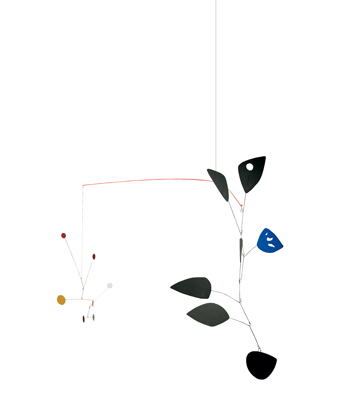 Alexander Calder’s Numbered One to Seven (1950) is an artwork with a reputation that precedes itself. When I started at Joslyn in June of last year, one of the first questions I got from a docent was, “When is the Calder coming back out?” A long-time patron of the museum asked me the same thing, as did at least three staff members. I started to think about the Calder as that cool, popular kid in your eighth grade English class whose mystique only increases when his parents whisk him off to Southeast Asia or some equally exotic place for the summer vacation. Joslyn’s Calder? Well, it wasn’t in Thailand, but it was in Chicago, Dallas, and Newport Beach, CA for a traveling exhibition.

So why was everyone chomping at this bit for piece to come home to Omaha? To begin with, for a relatively small, delicate work of art, Numbered One to Seven can hold its own in the gallery.  And it should be noted that some heavy-hitting companions share Gallery 16, where it is currently installed: Martin Puryear’s Self (1978) is a dark, wooden floor sculpture that generates a sort of black hole in the middle of the room; Ross Bleckner’s brooding multi-panel painting, 1944-1945 (1977/1980), dominates one entire wall of the gallery; and John Walker’s massive untitled canvas from 1983-84, painted in a loud, undeniable palette of oranges and reds, practically screams for attention. But that Calder…well, it knows what it has going for it. It’s always the quiet ones you’ve got to look out for.

Numbered One to Seven belongs to Calder’s most iconic body of work, which toiled to perfect throughout his nearly five decade-long art career: the mobiles. In 1931, artist Marcel Duchamp coined the term “mobile” to describe Calder’s moving, abstract sculptures. Reflecting the playfulness and reliance on chance espoused by Dada and Surrealism, as well as the aesthetic principles and simplified palette of De Stijl, Calder’s mobiles embody the avant-garde spirit of the early to mid-20th century. Composed of colorful shapes cut from sheet metal that are connected using wire and rods, these sculptures almost appear weightless as air currents coax them into new, unpredictable configurations.

Numbered One to Seven (1950) is typical of Calder’s smaller kinetic sculptures, notable for their lightness and subtlety, characteristics that became elusive in his later work. Created just as the artist was mastering the physics behind the mobiles, this whimsical hanging artwork deftly balances a group of dark, leaf-like forms with a constellation of brightly-colored circles.  Foreshadowing the eventual popularity of mobiles among infants and adults alike, French art theorist Jean-Paul Sartre offered the following insight in a 1946 catalogue essay on Calder: “A mobile is a little private celebration, an object defined by its movement and having no other existence.”